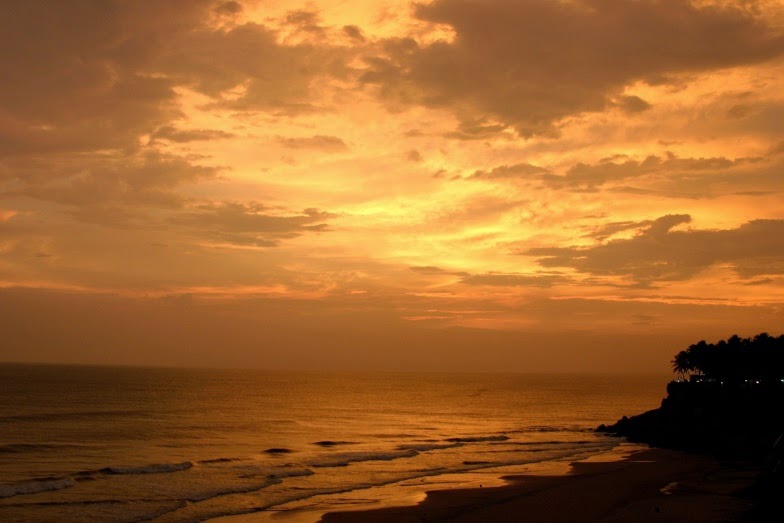 The sun languidly stretched her fading light across the horizon, painting the skies with a riot of fiery oranges, pomegranate reds, pinks and burnt siennas.  Wisps of charcoal clouds floated in, linking arms with fellow comrades, steadily weaving a tapestry of darkness and heralding the night in.  The roar of the sea could be heard crashing on the shores below, mingled with the shrieks of children as the water pulled the sand from beneath their feet. Sea gulls wheeled above in lazy circles while the sea breeze wafted in sometimes gently and sometimes in brief gusts, alternatively lulling and awakening the senses to the sheer magnificence of the nature around. 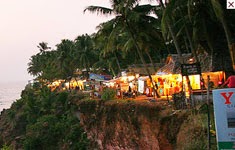 I basked in it, perched high above it all, with a plate of fried calamari and wine on a checkered clothed table beside me, at the tiny cliff-top restaurant, the Clafouti. Just a few feet of a paved path separated me from the latticed bamboo railing that marked the end of the cliff. Beyond it, the land just dropped down a sheer 50 feet or more of craggy rocks and outcroppings, straight down to a white sandy beach below. On either side of me, the pathway wound serpentine like, undulating and up and down, hugging close to the rocky edge of the cliff on one side, while on the other side stood shoulder to shoulder, a hoard of eatery joints and souvenir shops, local travel agents and tiny B and B’s, all with their colourful lights and twinkling neons beckoning the beach combers from down below.

This could be some quirky seaside town in Dovers, England or the Amalfi coast in Italy or Greece. But here I was at Varkala, about an hour’s drive from Trivandrum, Kerala.

The Varkala beachside is actually a series of small bays where the seemingly calm Arabian blue sea meets reddish black ferricrete rocks of the western ghats that date back to the Cenozoic age, giving rise to some dramatic landscapes.

(Janardhanapuram) or what is colloquially known as the Papanasam beach.  Papanasam, literally means destroying all evil (Paap) or getting rid of all evil karma. Hindus come here to perform last rites of loved ones, facilitating a cleansed soul for their onward journey at the 200-yr old Janardanaswamy temple. The Lord Vishnu is found standing here with his right hand in Aachamanam’ - a male purification ritual performed by Brahmins. Legend has it that if his hand goes nearer to his mouth, expected to happen at the end of the Kali Yug, the world will come to an end. The Taj Gateway, where I was staying is located at Janardhanapuram. The hotel itself is gorgeous – I particularly loved the large and airy lobby that opens out to overlooking the sea, filled with comfortable lounge sofas and bookcases holding an eclectic collection of books.

Waking up to the crisp air with a slight tanginess of the sea, temple bells resonating faintly somewhere, screechy cries of the gulls is itself a refreshingly different awakening experience. I decided to extend the experience with a walk. I was hoping to be able to walk straight to the cliff top directly from the hotel. But that was not to be.  Apparently I had to work my way up to the top. No shortcuts here.   A narrow winding pathway led from the hotel right down to the beach. After a dip of the toes into the azure waters, I walked along the base of the cliff, till I came to a rather steep stairway that led up to the top.   The climb was arduous, the view from the top – breathtaking.

As I mentioned before, Varkala is a series of beaches, each with its own quirks and individuality. One can saunter and meander along the cliff top to get to (well, above) the various beaches, and find a stairway to get down down to the sandy shores.

The southern part of the beach, where I started my amble is the quiet one – the waters deep and deceptively calm, with the temple providing a meditative mindspace for the soul. This part is also home to some spring waters with medicinal properties – a dip in which is supposed to cure anything from migraine to mental illness.

A little further down, the northern end of the Papanasam beach is the more gregarious one – with the backpackers and beer shacks.  If you prefer your own company, like I do, just walk on. A quirky stretch of black sand (going by the moniker of black beach) with the ubiquitous thatch of coconut palms, mark the end of this beach. The walk way extends a little further on to meet a tarmac that winds its way through the back of the hill top. Almost ludicrously the tarmac and walkaway meet at a point that is actually a helipad! I would have loved to see who choppers their way down here!

Varkala is, well, like a woman – mysterious, alluring, charming, flirtatious – offering quiet companionship or a romp in adventure, whatever be it that you seek. 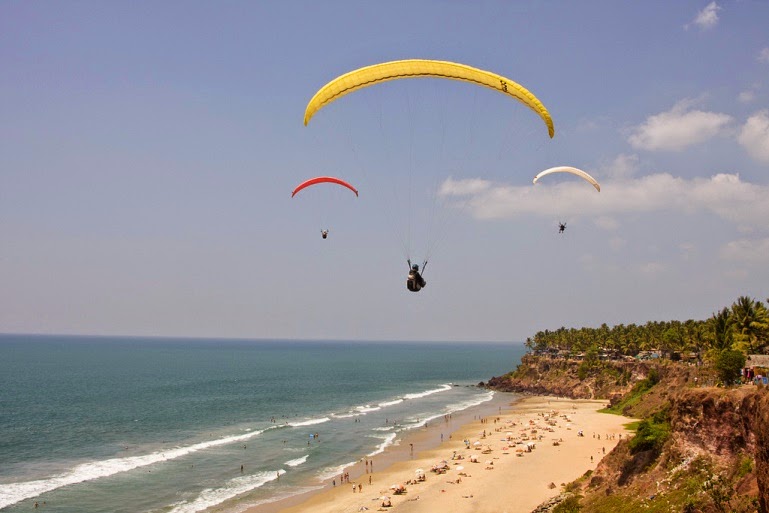 Enterprisers hoping to wean away tourists from the more popular sibling, Kovalam, offer paragliding, scuba diving and wind surfing. Not to mention the Ayurveda spas and massage centres. But for those hoping to just commune with nature, the Odayam beach or further down the Edava beach is where one needs to head to.  The Edava beach is particularly enchanting with numerous lagoons and backwater canals and pristine white sands with just an odd fisherman for company.  A walk or drive down a 1 km stretch of road running right in the middle of a blue lagoon on one side and the backwaters on other, is almost unreal.

For most, a beach holiday in Kerala would mean Kovalam.  Because it’s the one serenaded by tourist promotions as the place to head to since 1930, when the Maharani of Travancore initiated a tourist resort to cater to her European guests.

But for a state with about 600km of magnificent coastline, there’s bound to be a few undiscovered gems like Varkala.
Posted by Sush at 8:15 AM